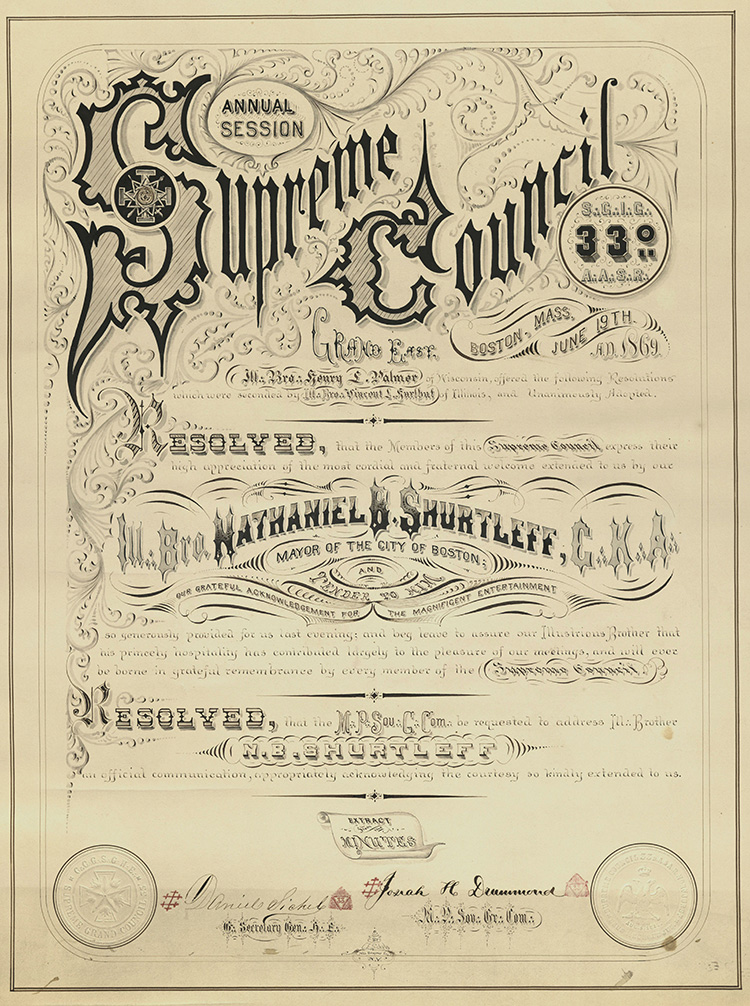 The 1869 Annual Meeting was held at the Masonic Temple in Boston. According to the 1869 Supreme Council Proceedings, on the second day of these meetings, Friday, June 18, the Supreme Council voted on “an invitation to accept the hospitalities of the Mayor of the City of Boston, the Hon. and Ill. Bro. Nathaniel B. Shurtleff, at Young’s Hotel, at 7 ½ o’clock, this evening.” On motion, the Mayor’s party invitation was unanimously accepted.

While the 1869 Proceedings provide no details about the celebration held at Young’s Hotel, an article published in the July 1, 1869, issue of The Freemasons’ Monthly Magazine gives a brief account of the dinner. It records that the tables for the reception “were furnished with such luxuries as the markets at this season of the year can afford, and were in great abundance.” The celebration continued “until late in the evening, when it was increased by the addition of music, by an excellent band from the City of Troy, New York, who had previously been contributing of their skill to the success of the Peace Jubilee.”

The National Peace Jubilee, which happened to coincide with the 1869 Annual Meeting, was a five day music festival held in Boston. It began on June 15, 1869, and celebrated the end of the American Civil War four years earlier. Thousands of people attended the Jubilee, and a huge temporary coliseum which could seat 50,000 people was constructed for the musical performances. The event was so attractive that The Freemasons’ Monthly Magazine reported that the Jubilee actually delayed the start of the Annual Meeting: “The session [i.e. the Annual Meeting] was informally opened on Wednesday, at 12 o’clock, noon; but, in consequence of the interest which the members manifested in the festivities of the opening of the Peace Musical Jubilee, the Council was called off until the following morning at 10 o’clock, and no business was transacted.”

The celebration hosted by Mayor Shurtleff at Young’s Hotel made a great impression upon his guests. The following day, at the Supreme Council’s Annual Meeting, Henry L. Palmer, a future Sovereign Grand Commander for the Supreme Council, offered a resolution, the text of which was incorporated into the certificate by its artist, Charles E. Sickels (1841-1927).

In 1869 Sickels was a 28-year-old artist and engraver who executed this certificate entirely by hand. He had only been a Mason for two years. His father, Daniel Sickels, 33°, Grand Secretary General for the Supreme Council, signed and sealed the certificate in the lower left-hand corner. Charles Sickels would later go on to become the head of the Art Department of the American Bank Note Company, which printed currency and stamps for the federal government, as well as stock certificates. By 1875, the American Bank Note Company printed membership certificates for the Scottish Rite.

You can get a closer look at the Certificate of Appreciation by visiting the Van Gorden-Williams Library & Archives Digital Collections Website.

The Van Gorden-Williams Library & Archives is located in Lexington, Massachusetts, at the Scottish Rite Masonic Museum & Library and is open to the public 10-4, Wednesday-Saturday. Have questions? Drop us a line at library@srmml.org or give us a call at 781-457-4109.